[Update: Version 0.3 has been released]

So I’m announcing version 0.2 of the task board enhancer, Which adds three more features (actually just two, another one is just a refining of the auto refresh so it doesn’t count as a feature).

There is still no UI to configure (it doesn’t seem that bigger deal, since the auto refresh feature intention is to be used un attended anyways).

In order to define the refresh interval you have to pass the _tspRefreshInterval parameter in the query string. The value is specified in seconds. (the default value is still 30 seconds).

If you activate it, it removes the hubs entries (Home, Work,…) and the second level tab.

This is feature can be enabled on the UI

or by passing the parameter _tspMaximize with the value of 1 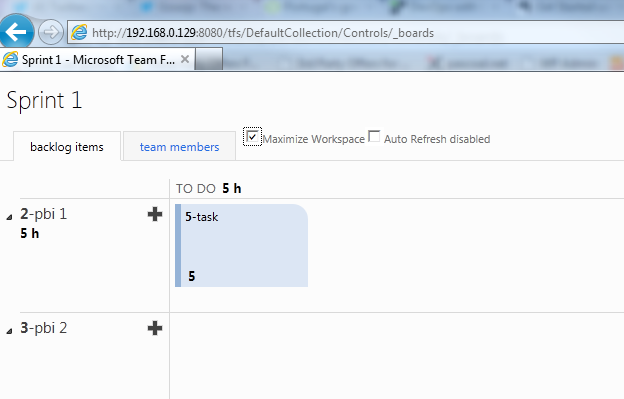 In a previous post Adding work item ids to Team Foundation Server Board, I talked about one of the most requested features I hear, is the desire for people to have the work item id listed on the cards as part of the title.

I  mentioned I wanted to do this as an extension, but there weren’t enough hooks in the extensibility model for me to do it cleanly, so I provided a bookmarklet to do it.

The hooks are still not there, but I’ve implemented it anyways

It’s still not implemented in a clean way, but it’s implemented as an almost elegant hack. There is a small delay for the id to be visible, if you drag the card to another lane, the id will disappear and will appear again after a small delay.

If you look at the image closely, you will noticed that in the collapsed parent work item (the horizontal lane) the work item id is not visible, it an unfortunate side effect due to a quirk in the current implementation of the task board. I’m evaluating if I can work around this behavior with an elegant hack. Perhaps in the next version.

This feature is not toggle able. It’s always enabled.

I still have a few more features on my backlog, but if you have any suggestions I would love to hear them.

How to get it?

if you have have doubts how to install it, it’s fully explained in the previous post Team Foundation Task Board: Auto Refresh