The TFS Board Enhancer is a TFS Web Access extension, that adds extra capabilities to the TFS Task Board and the TFS Kanban board.

This is the list of features until version 0.5, with version 0.6 only one feature has been added, but it has been one of the most requested features.

One of the most request features, is the ability to easily see which requirements/tasks are blocked.

This feature allows you to see at a glance which tasks (or requirements) are blocked, it works on MSF CMMI, MSF Agile and MS Scrum process templates (CMMI supports both tasks and blocked requirements, the other two only support blocked tasks).

A task/requirement is blocked if the Blocked field is set to Yes (the reference name of Microsoft.VSTS.CMMI.Blocked) 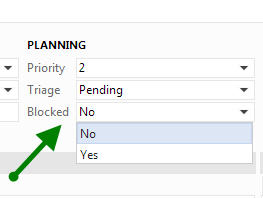 If the task is blocked, the left border becomes a little bigger and red instead of the regular blue.

This feature doesn’t has a filter to enable/disable it. It’s enabled by default. But you can disable it, by passing the parameter _tspSkipBlocked in the query string (no value necessary).

This only works against the task board, it is not supported on the Kanban board.

All in all it’s pretty simple, but would like to have your thoughts…

if you have doubts how to install it, it’s fully explained in a previous post Team Foundation Task Board: Auto Refresh