When I started doing this, it was just a small thing. I never expected it to become so big, so on this release most of the time was cleaning up the code (which grew very organically) to prepare it for future features. So this a very small release with only one features and two small improvements.

You can also see full list of features here

Show in the right corner of the card a count with the number of tags the work item has.

If you hover the counter, a tooltip will show you the tags (separated by commas).

You can read more about work item tags here

This feature can be enabled/disabled. (enabled by default)

Change the auto refresh interval in the UI

On previous versions if you wanted to change the auto scroll interval, you had to do it with a url parameter. Now you can do it on the UI. 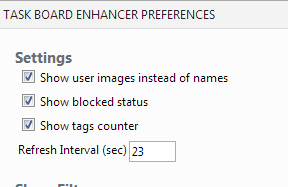 Freeze auto refresh countdown when a work item is open

That was already supported previously. If you opened a work item when auto refresh was enabled the counter would stop. Unfortunately it was implemented poorly and there were same cases, it wouldn’t detect it, so an auto refresh could kick in.

That has been improved, and as long as there is a window open auto refresh stops the countdown.

Don’t forget you can always subscribe to the newsletter (see right side bar) if you want to be notified when new versions are released (typically news letter subscribers can get the new version a few days before a new version is announced).

There are two different versions, depending if you are already running TFS 2012 with update 2 or 3 or an older 2012 version (RTM or Update 1).

For Update 2 and upwards Download version 2.7.5 of the extension

For RTM and Update 1  Download version 0.7.5 of the extension