Based on the analysis on the downloads, there is now a big gap between version 2.x.x and 0.x.x version downloads and added to the fact that maintaining four different codebases takes quite some time (for something I’m doing on the free time that I do not have) so I’ve decided to drop versions support for TFS 2012 RTM (or update 1).

This is mainly a bug fixing release.

I’ve only added a minor feature, it is now possible to display the user to which a requirement (product backlog item,….) is assigned to. 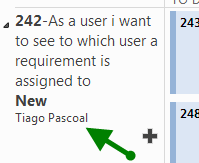 This feature is configurable and it’s disabled by default. You can enable it on the preferences window

Besides this feature I’ve fixed the following bugs

For Update 2 and upwards Download version 2.7.7 of the extension