This is a very minor release, except for the fact it now brings support for TFS 2013 that so many people have been asking for.

The version for TFS 2012, fixes an issue where on non english versions of TFS the color for the (different type) of requirements were all the same.

Mark a blocked work item with a tag

Previous versions allowed you to easily visualized blocked work items. The only way to mark them as blocked, was setting the Blocked field (field with the Microsoft.VSTS.CMMI.Blocked reference name) to yes. This worked fine, if the process template didn’t had this field, you had to add it, but if you couldn’t change your process template then you couldn’t use this feature. 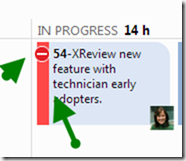 Now you can add a tag to signal that a work item is blocked. Since TFS supports five languages, I decided that these 5 words (regardless of TFS language you are using) used in a tag would have the same effect as setting the Blocked field value to yes.

For Update 2 and upwards Download version 11.2.8.0 of the extension

This version works with TFS 2013 RTM