TLDR; Two feature changes and two bug fixes. One of them being a security fix. You are advised to upgrade to this version

This is could lead to script injection attacks (even considering the work item title is of limited size).

Just to make this very clear, the vector attack is limited and has to be done by someone who has permissions to create work items.

Basically it needs to be exploited internally. An inside job, so to speak, so the threat seems to be small. Nonetheless the problem exists, so you should upgrade to this version.

t’s there so you should upgrade.

Show the (kanban) State of a Requirement on task board

Maybe this should be named, task board meets kanban board.

This is not exactly a new feature, but a an improvement to an existing one.

Previously the state of a requirement were shown for requirements (to be more correct any work item on the requirement category), this feature has been slightly changed. Now instead of showing the work item state, the kanban state (if you are not customizing kanban columns, then this feature will behave like it always had).

Assume we customized the kanban board and added a ”Ready to be documented” state.

If you go to the task board, this state will be shown 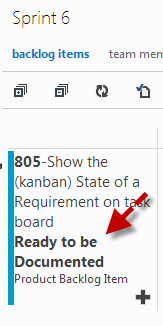 Allowing you to have a better view of your requirements right from the task board, without the need to go the kanban board. (remember kanban columns are customized by team, and this is respected on this feature, so different teams can see different states, just like in kanban board).

Show the color of a work type type for requirements

This is also a slight change from an existing feature. 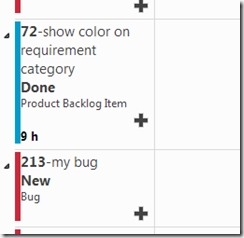 In the previous version, Support for 2013.2 release candidate was added, when the final version come out, a small change broke support for showing user images on the cards (the pictures were too big and stretched). So this version fixes this issue if you have TFS 2013.2 RTM

The version for 2012 RTM or 2012.1 is no longer under active development, but a new version has been released to fix the security vulnerability Download version 11.0.7.7 of the extension

For Update 2 and upwards Download version 11.2.8.3 of the extension

[Update] A bug has been found in version 11.2.8.3 the board would fail to load, if the grouped by People was enabled **. You should Download version 11.2.8.4 of the extension instead

[Update]  A bug has been found in version 11.2.8.4 the board would fail to load, if the Team Members tab was active. You should Download version 12.0.8.4 of the extension instead

If you are running into this for the first time and you have no idea how to install it, full instructions are provided on Task Board Enhancer page