When creating a team build 2015 (often called build v.next) or a release management definition, you can store secrets in variable (for example for passing a password or a token to a task).

Secret variables cannot be seen when viewing/editing a build definition (hence the name secret), only changed.

Secret variables have some disadvantages

The task is called Set Variables with Credential and it’s part of a bigger package called Variable Tasks Pack which contains other tasks that deals with variables, it contains the following tasks

When you install the Variable Tasks Pack in your VSTS account from the marketplace, the extension will also configure a new Service Endpoint type, called Credential

This will allow you to store on your team project a username and a password (don’t worry password it’s just a name you can use it to store any secret, for example I used it to store a Personal Access token to publish extensions on the Visual Studio Marketplace). The connection name it’s just a label you can use to give it a meaningful name. 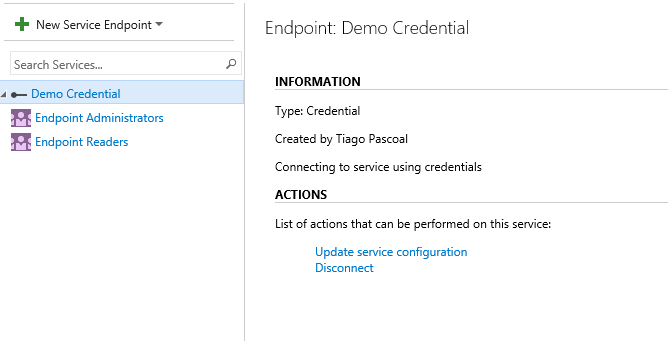 This will allow you to define which users have permission to use a given credential in a build/release definition. This means people with permissions to edit build/release definitions are not able to change secrets and only use the ones they are allowed to (you can also add users to Endpoint administrator to define who can edit the credential endpoint).

After you have defined your credential(s) you can use then on your build/release definitions, the provided task has three parameters.

This will set the value of a regular variable, that can be used in other tasks like if it was a defined variable.

For example, if you set in the “Password variable name” the value MyVar

You can use it on subsequent task, like any other variable (Eg: $(MyVar) )

With this task not only you can control who can change/use a given secret, it is also possible to have a central place where the secret is stored and if you update it all definitions that use it will pick up the change immediately and you don’t have to update all tasks manually as if you used a secret variable.