[Update: Version 0.5 has been released]

[Update: I’ve release version 0.4.2 to replace version 0.4.1 since a bug has been found on the Kanban board (the IDs were completely wrong). I guess I can now declare 0.4 the worst version released to date

[Update: I’ve released version 0.4.1 to replace version 0.4, which was totally broken on 2012 RTM. My Apologies to everyone who had already downloaded version 0.4 and has not upgraded to TFS 2012 Quartely update yet]

Before I describe the news features, let my add a disclaimer.

When I started developing the TFS, I had two intentions. An educational one, where I could learn a little more about its internals and the extensibility model, the second to develop something useful to myself (time is too precious to be accounted as a sunk cost, I have a personal rule; the product of research has to result in something (at least slightly) useful).

While the extension is of limited scope and with a small set of functionalities, at a certain point I thought this could be also useful to someone else, so I decided to release it to the world for free (as in free beer not as in open source).

When I started developing it, I thought the extensibility mechanisms I was using were merely undocumented due to it’s relative youth,something they would be fixed in due time. However  as time went by it has come to my attention not only they were undocumented they are also unsupported.

This means the extension can stop working when Microsoft releases a new version or update (not saying that it will, but that is the risk of using unsupported mechanisms).

I will repeat this on a more clear and prominent manner.

**This extensions uses undocumented TFS mechanisms, this means there is a risk (which I’m not able to quantify) it will stop working in the future with new TFS releases or updates . If that happens, the fact that the extension no longer works, it will be my sole responsibility and not of Microsoft.
**

I’ve only become aware of this after version 0.3 was released. I seriously considered stop releasing new versions, however after some consideration I decided to make new releases publically available. After all the worms were already out of the can it, and I’m not able to put them back inside. I decided to continue releasing new versions, but make it more clear the kind of risks of using it.

Besides supporting the features available in previous versions:

This version brings some new features 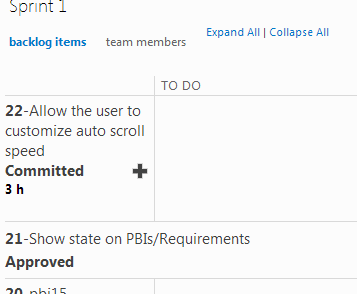 The speed of the scrolling can be controlled via the UI (half, full and double speed). 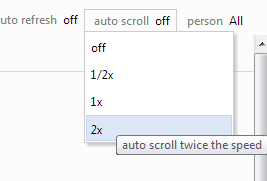 This feature is supported on both the task board and the kanban board.

Support for Kanban Board

With the release of Visual Studio quarterly update 1 Microsoft introduced in TFS supported for a Kanban board. If you have installed this update, the task board enhancement will support it (the update is not necessary for other features) and will enhance it the following ways

if you have doubts how to install it, it’s fully explained in a previous post Team Foundation Task Board: Auto Refresh